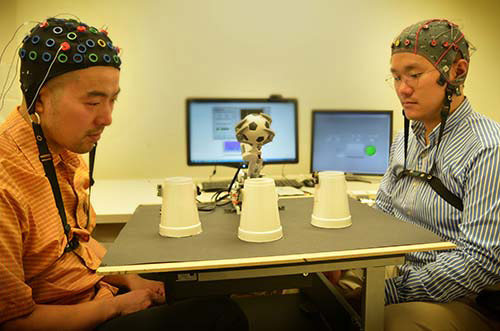 Last month, ISE Professor Chang S. Nam’s research team began a three-year research project funded by the National Science Foundation. This research targets a patient group with an even greater need – people without the mental ability to form messages or respond to questions. Their plan is to use brain-computer interface (BCI) technology to allow this patients to communicate.

This project should have a dramatic impact on some of the most vulnerable people in our country – people who not only cannot move, but have been mistakenly labeled as unable to think and perhaps even recover.

A brain–computer interface (BCI) is a direct link between the brain and an external device. BCIs are often used to assist or repair human cognitive or sensory-motor functions.

The human brain has the ability to function in new ways and adapt to implants well into old age. That is why BCI researchers choose to focus on neuroprosthetics applications that aim at restoring damaged hearing, sight and movement.