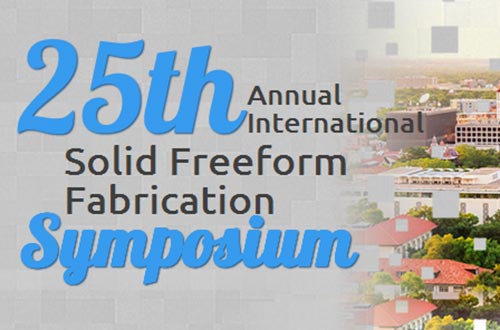 The research team consisted of two ISE professors, Ola Harrysson and Harvey West. Ron Aman and Tim Horn, researchers, and Caroline Webster and Harshard Srinivasan, PhD students, made up the rest of the team. Three members of the team were responsible for presenting their research to the capacity crowd.

Ron Aman discussed advances ISE has made using acetone vapor to polish the surfaces of 3D printed plastic parts. When plastic parts come out of the 3D printer their surface is too rough to meet many industry standards. So ISE researchers have been using an acetone vapor to melt and thus smooth the surface of the part. An added benefit to this process is that it also strengthens the part.

Tim Horn gave an overview of Professor Harrysson and Dr. Denis Marcelli-Little’s work with 3D printed prosthetics. For years, they have been creating and implanting custom designed prosthetic limbs into both cats and dogs. The goal of their work will be to apply this technology to humans.

PhD student, Caroline Webster, talked about creating 3D printed skulls for medical schools. Currently, medical students use cadavers to practice drilling holes into the skull. The 3D printed skulls would reduce the demand for donated human bodies. Another advancement with this technology would be the ability to create patient-specific models. This would allow the surgeon to practice on an exact model of the patient’s skull before performing the surgery.

3D printing is transformed entire industries like aerospace, automotive and as you can see, healthcare.

“The 3D printing industry grew 35 percent last year and has averaged 32 percent for the last five years,” Said Terry Wohlers. “The industry is going to be in the tens of billions of dollars.” Terry Wohlers is an industry expert and friend of the ISE Department.

Modeling for Philanthrop-IE ISE is the Model of Health