Congratulations to ISE professor David Kaber who received Fellow status in the Human Factors & Ergonomics Society (HFES) this past Tuesday, September 20. Fellows are appointed by an internal Fellows Selection Committee. Dr. Kaber received this honor based on his research contributions in the areas of human-automation interaction, user interface design and evaluation and virtual reality (VR) design. 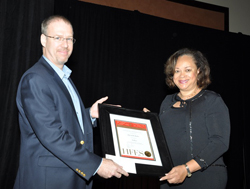 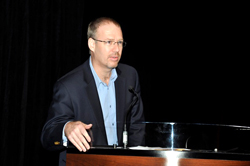 David Kaber speaking about his research and development.

Regarding user interfaces, Kaber has developed novel methods for design and usability evaluation, including a metaphor-based approach to intelligent displays for high-throughput screening systems, use of cognitive task analysis to define supervisory control interface content, extension of HCI usability evaluation methods to the cockpit and approaches to usability in cockpit interfaces. Most recently, Kaber used computational cognitive models for assessing the usability of human interfaces in life science automation.

In the VR area, Kaber developed a theory of telepresence in synthetic environments. He received the Jerome H. Ely Award from the Human Factors & Ergonomics Society and a CAREER award from the NSF for this research. He demonstrated the utility of SA measures for quantifying presence in VR, implications of telerover LOAs on operator presence in using VR interfaces, and the effects of multi-modal VR design on telepresence and the relationship with performance. More recently Kaber has studied the use of VR for facilitating motor control task training and performance assessment, including locomotion and surgical procedures.

For contributions to engineering research, Kaber received The Alcoa Foundation Engineering Research Achievement Award (2006) and The Sigma Xi (Scientific Research Society) Research Award (2005). He has authored 45 journal articles, 15 book chapters, and 95 conference proceedings. He has given 45 invited talks. He has received over $5M in grants from the FHWA, DOT, NASA, NSF, ONR and ARI. With this funding, Kaber has supported and supervised 14 PhD students and 17 masters students.