The streak was supposed to end at 53.

Fifty-nine was never even thought of as possible, but then again, A.J. Cole was never supposed to go from undrafted free agent to the starting punter for the Oakland Raiders either.

The aforementioned streak is one between Cole and his father, Alfred, which involves a simple, yet meaningful, pregame ritual.

Regardless of location, time – or weather condition – the elder Cole meets his son pregame, and they snap a photo together; more accurately, they snap a selfie, and the duo hasn’t missed a photo op since A.J. participated in the Georgia vs Florida High School Showcase game following his senior year at Woodward Academy near Atlanta.

And just like that, the pair were off to the races, snapping photos at stadiums all around the country, as A.J. kicked his way through the ACC. 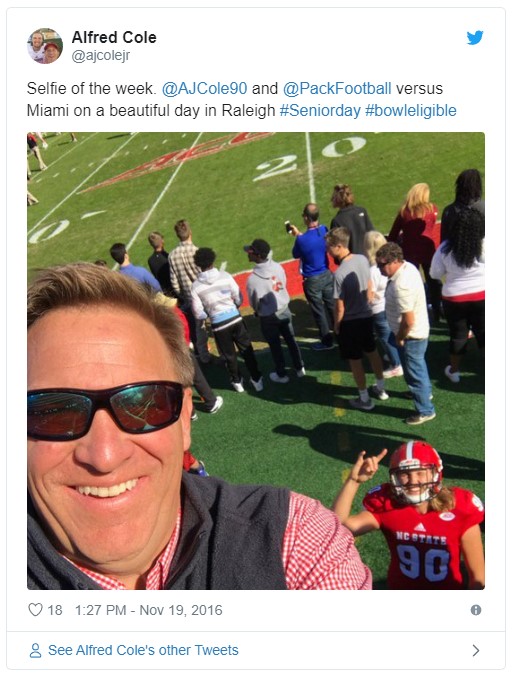 Like all good streaks though, there were a few near misses along the way.

There was the home game A.J.’s freshman where Alfred and his wife Kim showed up 10 minutes before kickoff – much to the chagrin of the young punter.

And then there was the game in South Bend where Alfred’s seats were so high up at Notre Dame Stadium that he had a hard time convincing the ushers to let him down close enough to the field to snap a photo with his son.

So, how did he convince them that he was indeed the father of the Wolfpack’s punter? He whipped out his phone and showed them his folder of selfies, naturally.

Oh, and then there was that game against Eastern Carolina A.J.’s junior year, where his parents landed three hours before kickoff, drove two hours to Greenville, and made it in the stadium just in time to take a selfie.

Through it all though, the pair soldiered on, snapping their selfies, with the ritual eventually becoming part of Cole’s pregame routine.

“It’s been a fun tradition,” Alfred said. “It helps him – I think it helps A.J. relax some. We’re there. He knows we’re there. We usually take it way before the game, so it’s not any problem with him getting ready for the game.”

“It’s a part of just locking me in for the game,” added A.J. “My dad always says he’s seeing the world one football game at a time. It’s just a tradition. It’s what we do. I go up to him after we’ve had the warmup kicks, usually it’s just a quick slap five, and then alright, let’s do the selfie, and then, ‘good luck, you’re going to do great.’” 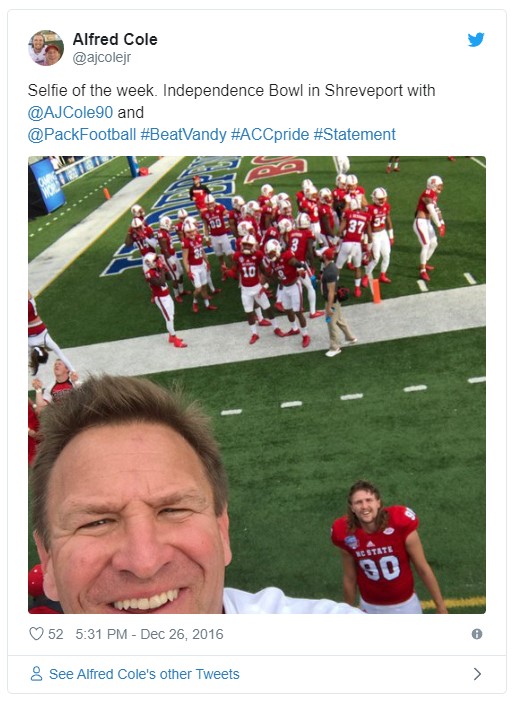 But, as is the case with all streaks, there was an understanding that it would end at some point, and following a rough outing against Marshall his senior year, A.J. decided it was time to hang up his cleats and start looking for a real job, thus ending the streak at 53.

In fact, the younger Cole was so determined on starting down a new path that he spent the wee hours of the morning after that game applying for jobs, ultimately being offered and then accepting a job with IBM working in tech procurement.

He accepted the job in November with a January start date on the horizon, but then – as is the case with many of these stories – A.J. got a phone call that would change his life.

Following that call, the family quickly started interviewing agents – just to be on the safe side – as A.J. prepared for his outing at Tropicana Field.

From there, things moved quickly for Cole.

After going undrafted, he earned a tryout with the Silver and Black at rookie mini-camp, then signed a deal following the three-day tryout, and once A.J.’s parents realized he’d likely make it through the summer and into the preseason, they got to booking flights. 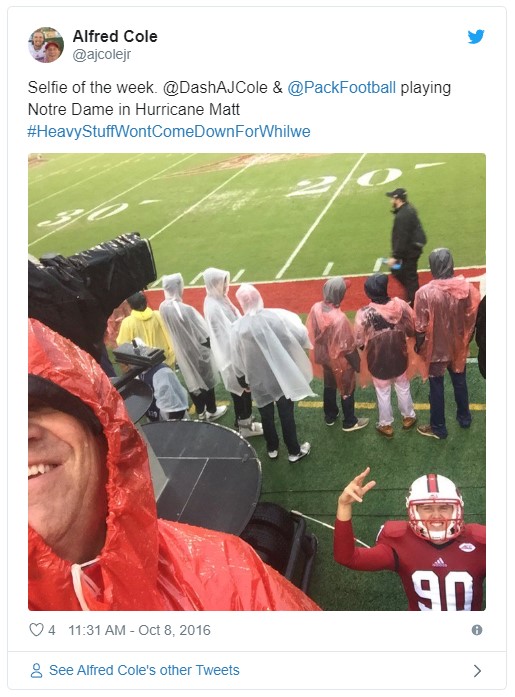 And as was tradition, at each stop along the way, the Cole’s took their pregame selfie.

“My sister and brother-in-law, and my best friend, and his wife, two of A.J.’s best friends from high school, we went to that first game in Oakland,” Alfred explained. “We all went because we were like, this could be A.J.’s only game that he gets to play in, and we want to see him play.”

But, after the team waived Johnny Townsend on August 13, it became clear that A.J.’s career in the pros – and the streak as well – would live on a little longer than anyone in the Cole family originally thought.

Even then, A.J. wasn’t counting his proverbial chickens before they hatched, as he stayed in constant communication with IBM, keeping them in the loop of his developing situation as an NFL punter, and routinely pushing back his start date.

The would-be IBM employee and his hiring manager finally decided on a September 3 start date, but a few days before he was – once again – scheduled to begin his new career, A.J. finally made the call.

“Listen, man, there are only 32 jobs I’d rather have, and they’re all in the NFL, and I got one of them,” Cole said he told his boss. “I’m not coming, Rick. I appreciate everything, but I’m just not going to be there.”

Now, instead of working in tech, the 23-year-old punter is getting ready for the biggest game of his life, a Monday Night Football tilt against the Denver Broncos in what will be his first regular-season game, and the 59th consecutive time he finds his dad for that pregame selfie.

“It’s so far beyond what we imagined, so far from what we considered possible when he was growing up – even a year ago,” Alfred said. “It’s going to be hard to define that. Monday Night Football, the Coliseum, with the Raiders, its history. It’s going to be a little bit surreal, and I’m kind of looking forward to that. I want to cheer him on, and take the picture, and post it on ‘selfie of the week’ and let everybody see. It’s going to be a pretty big celebration.” 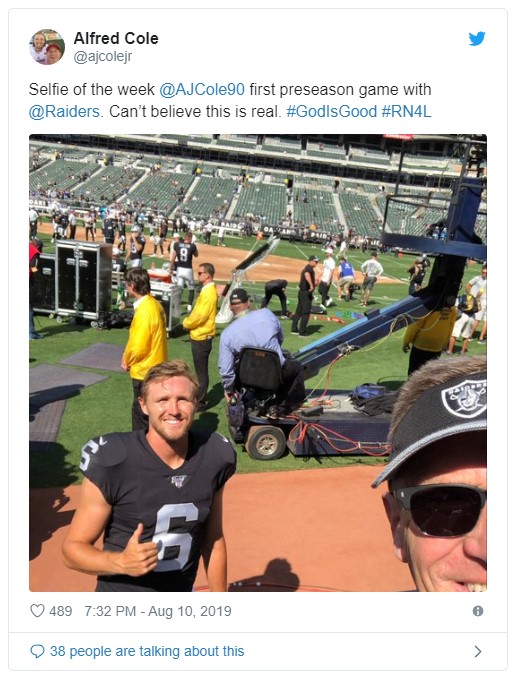 “It’s going to be the coolest one,” A.J. said when discussing the 59th edition of the father/son selfie. “Because it’s just kind of what you’re working for. The goal is to get the opportunity to make a 53-man roster, go out there on a Sunday or Monday night, and play NFL football. That’s something you dream about your whole life.”

As is the case with all streaks, one day the selfie streak will end, although, the date of the final photo is up for debate.

“If he was working at IBM, I wouldn’t watch him go make spreadsheets,” Alfred quipped. “I don’t know how much longer we’re going to keep it up, but we’re enjoying seeing the world, and seeing stadiums that we never got to see. We’re big football fans, so we’re really enjoying that. It’s been great.”

“I can’t really tell if it’s going to end this season or not,” A.J. added. “The way he [Alfred] is talking, he just seems like he’s all in on this season, and making it to all of them. Just it being my rookie year, and I think there are a lot of cool places we’re going to this year, that he’s never really been before.”

And regardless of when it ends – whether it’s next week, next month, or sometime later in A.J.’s career – the streak has survived college, and now the NFL, blowing away the expectations for both Cole’s in the process.