NC State Engineering alumna Tamara Robertson, fresh off of her appearance as a finalist on Science Channel’s Mythbusters: The Search tv show, came back to campus to be a celebrity judge at Engineering Design Day. After the event, Tamara sat down with ISE to talk about her time at NC State as well as her career as an engineer, actress, and science communicator.

A Historical Route to Engineering 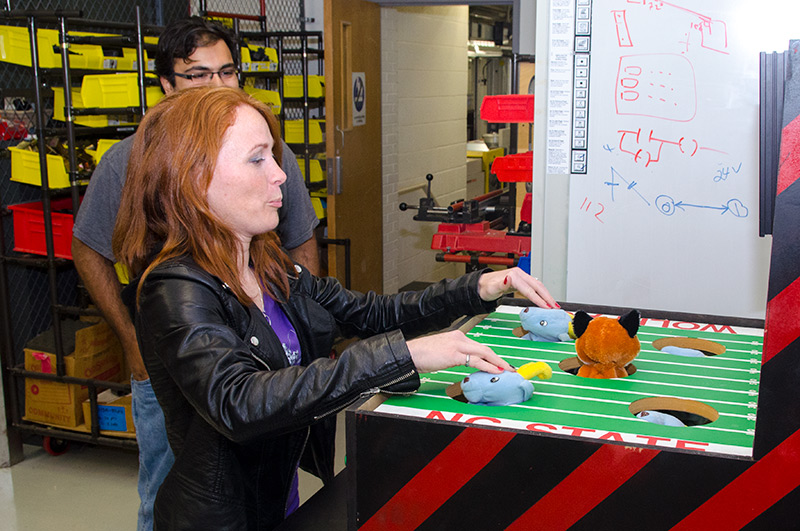 Originally pursuing a degree in history from her local community college with eyes on law school and becoming an officer in the military, Tamara Robertson started adopting various minors in math and science halfway through her freshman year. Her calculus teacher asked if she had ever thought about engineering. “I kind of laughed and thought ‘the only engineer I know is Scotty on Star Trek’,” said Tamara.

After a tour at NC State and sitting in on a materials science class in Riddick Hall, Tamara returned to her community college and switched to the pre-engineering program.

Transferring to NC State was a no-brainer for Tamara. “NC State was one of those things,” she said. “’I’m a redhead and was born to be red’ is what I tell people why I chose NC State over the other universities. But also, the family feel. Even though I walked on campus and there were more people passing me by in the brick yard than there were in my hometown, I felt like I was home. It’s always been where I feel at home.” Even coming back recently to serve as a celebrity judge at May’s Engineering Design Day, Tamara felt at home and truly appreciates the peace and serenity campus continues to deliver.

Tamara is very pragmatic and researched which field of engineering would be hiring when she was set to graduate. She realized there were many options in the field of chemical engineering and appreciated the flexibility it offered. She now tells students, “have your goals and your dream job, but be flexible in your approach and make sure your degree will allow for that flexibility.”

In fact, as an undergrad Daniels Hall is where Tamara’s heart was, as it is where she met Engineers Without Borders for the first time – what she calls, ‘her first little wolf pack.’ Thinking back on her undergrad experience, she also remembers many-a-nights sleeping in the student lounge on Centennial Campus working on homework with fellow engineering students. For her, undergrad was “definitely all about the pockets of friends I made, and the little packs I formed,” she said.

Her favorite project during undergrad was her research with Chemical and Biomolecular Engineering’s Associate Professor Dr. Steven Peretti and running the biodiesel plant. For her, it was a chance to see a project from start to finish. She had the opportunity to redesign and retrofit a system, and in the end, they had pretty decent biodiesel they could use that had a good cloud point. 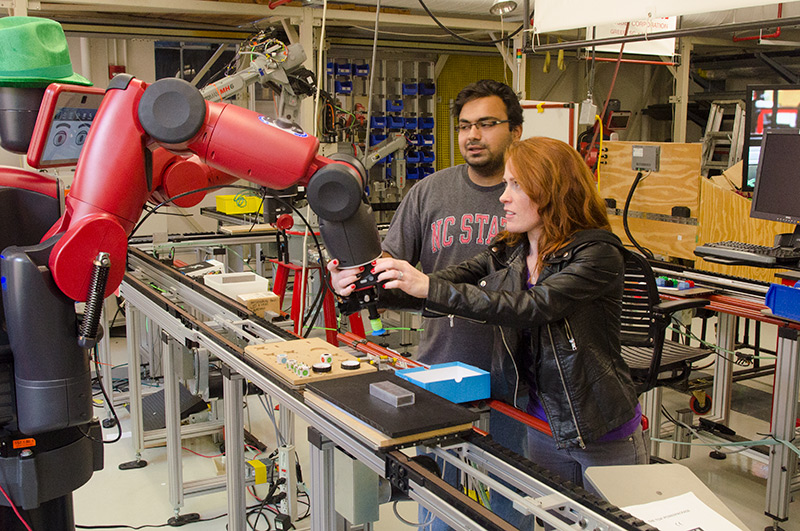 While at NC State, Tamara came out of her internship at Milliken Chemical with a patent in her name for an additive that is now in 90 percent of polypropylene on the market. Based on her senior design project experience with a vaccine facility, she accepted a job with Novartis Vaccines where she helped with a green field start-up for the U.S. government making the first mammalian-based vaccines and cultures. This position lent her the opportunity travel the world. She even spent an extended period of time in the U.K. during the Swine flu pandemic and assisted with making a vaccine for the U.S. After coming back to the U.S., she worked on the very first clinical material for Avian Flu, as well as collaborated with the World Health Organization and CDC to continue work on the Swine Flu.

After Novartis, Tamara returned to Milliken Chemical. “Someone dropped a Forbes 30 Under 30 on my desk and said ‘you could do this, you should do this’,” she said. She was placed in a high-potential program and was redirected to the company’s business side and assisted with launching and designing products with Fortune 500 companies.

Then, she moved on to serve as a Global Director for a Houston-based company launching its first consumer product division. This was all in line with her goal of being in the executive suite before she hit 30. Although, she soon realized she was living someone else’s dream for her career. “I really missed the tech,” said Tamara. “I am an engineer and a tinkerer through and through.”

So, she left the ‘Corporate America’ side of engineering, giving herself a year to pursue Science Communication, spending more time with kids and encouraging them to pursue careers in STEM.

The Engineering Experience of a Lifetime – MythBusters: The Search 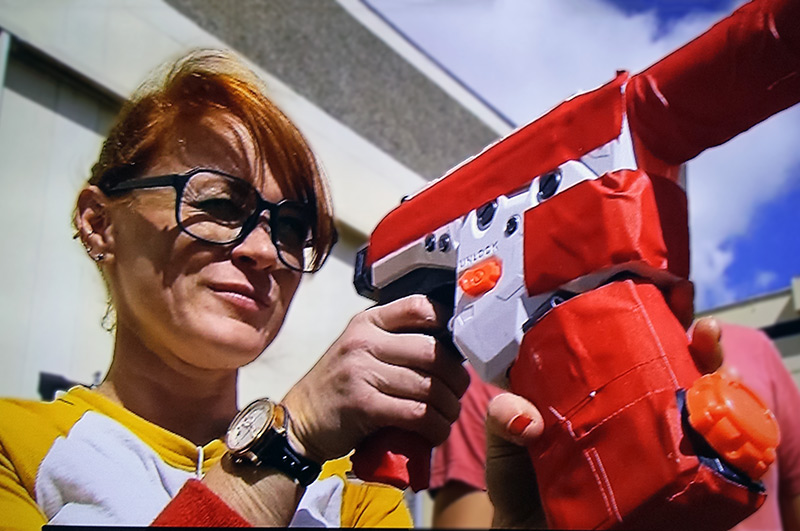 “MythBusters was one of those dream jobs,” said Tamara. “I remember when I was at State, we used to watch it and it was kind of like our ‘muse’ of what we were going to tinker with and mess with at home and hopefully not set too many fires – there were a few.”

Tamara actually started pursuing acting because of Kari Byron on MythBusters. “Seeing a woman not only being technical but getting to be in an area where she was able to be artistic and have both was really inspiring,” she said.

While pursuing Science Communication, she came across casting for MythBusters on IMDB. She jumped into the application process and sent in the required video. While other applicants had great videos of them being ‘techy,’ Tamara’s background did not lend her the ability to film the design of patented technologies and government related projects. So she filmed a really quirky video in her kitchen and said, “They’ve got a redhead on the show, they’re used to quirky, that’s got to be what they want.”

The video did the trick, as she was selected as one of 10 contestants for the show. From holding a pound of C4 in her hand and exploding it, to scaling a seven-story building, Tamara was willing to risk it all for the opportunity to be one of the next hosts of the show. While she did not win a hosting spot, she is thrilled with the outpouring from fans. She has parents of young children that write and even stop her in public, to express their gratitude for her being a role model to their daughters and sons. “The overall experience was just so exhilarating,” she said. “My only goal was to be a good role model for young girls and women that were in STEM and wanted to pursue STEM.” 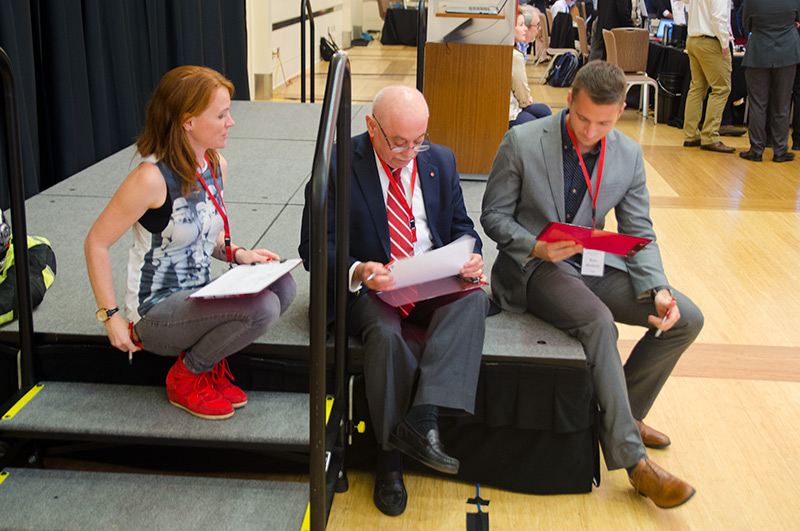 “Being a judge was really hard,” said Tamara. “Everything is just so amazing that the students are doing. Especially looking at the top projects within each department, every single one of the projects had a human touch aspect. They were all in some way helping save lives or helping to make lives better. The things students are coming up with—improving upon, innovating on—it’s just really kind of mind blowing.”