This spring, some of the best and brightest engineering minds arrived at NC State for the Institute of Industrial and Systems Engineers (IISE) Mid-Atlantic University Regional Conference. It was a chance for the students to jump-start their careers by discussing and sharing research as well as networking with and listening to industry speakers.
The ISE Department played host to students from many nearby universities including:

The conference kicked off on Friday evening with several social events. This gave the students from so many different universities a chance to start forming their own professional networks with other up-and-coming students.

On Saturday, it was time for the students to get down to business. The morning session began with a keynote presentation from ISE Distinguished Alumna Ege Gul from the SAS Institute. After the keynote, some students competed in the Technical Paper Competition where the winner moved on to compete at the IISE Annual Conference in Orlando. ISE’s Brent Goldstein and Annie Lin represented NC State in the competition. 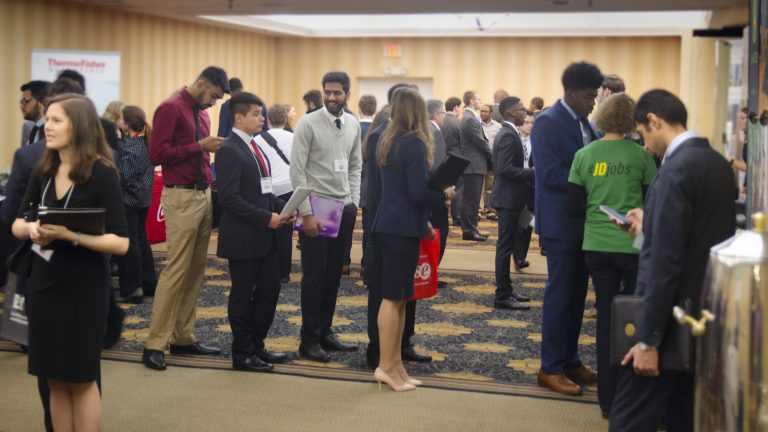 Students talk with potential employers during the job fair session

The students who did not take part in the competition attended a career panel where they could ask questions about different career paths from industry professionals – including ISE advisory board member, Cheryl Doninger – as well as academics. The morning session wrapped up with a job fair where representatives from over a dozen companies were on hand to recruit students.

The afternoon included four breakout sessions that allowed students to talk with industry and academic professional in the areas of data analytics, entrepreneurship, graduate school, and professional development. Some of the panelists included ISE distinguished alumni, advisory board members, and current faculty:

On Sunday, students attended a President’s Meeting and a Town Hall before heading back home. The event could not have been a success without the hard work of the conference committee members, Musaab Alamoudi, Ben Boyd, Nicole Niemer, and Gibson Russell.

Advisory Board Chair Notes | May 2018 Welcome New Board Members