In the spring of 2015, David Rosar had retired from a career that started in the aerospace industry creating flight simulations and ended in the manufacturing industry building custom equipment.

In his possession were two manufacturing machines worth about $750,000 known as odd form pick and place robots that he knew needed a home. “It would be a shame to throw these away and I knew Dr. Lee [ISE professor Yuan-Shin Lee] through a mutual acquaintance,” said Rosar.“ So I contacted him and asked if he could use the equipment.” Needless to say, the answer was a resounding “Yes”.

Part of the agreement to donate the equipment to the ISE Department was that Rosar had an open invitation to use the equipment whenever he liked. In fact, ISE lecturer Jason Low asked if Rosar would be willing to help with several student projects in ISE’s Automation Lab. “That is exactly what I wanted,” confided Rosar. “This has been like an engineering sandbox for me. I’m deeply grateful to Dr. Lee and Jason for allowing me to continue doing what I am doing right now.”

Todd Goldfarb, ISE student, worked as one of the lab assistants in the automation lab between 2014 and 2016. “Mr. Rosar became a ‘household name’ in the lab. As he became more familiar with the ISE department, he got more involved and volunteered to help students with automation projects in the lab.”

Todd recalls the time Rosar volunteered at the Engineering Open House in the spring of 2016. “I was coordinating the spring 2016 open house program,” recalls Goldfarb. “He was a huge part of the automation lab demonstrations and speaking with prospective students. He was so excited to be a part of the team, that when his wife and family came to visit, they knew he was ‘in his element’. They said he was the happiest they have seen in a while and that he talks about the lab and students at home all the time. It was very special.” 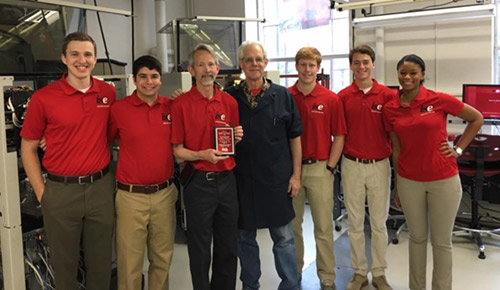 The ISE Department would like to thank David Rosar for his generous gift and his continued involvement mentoring and educating our students.