Many NC State students spent last summer abroad engaging in new experiences, advancing their skills and spreading the Wolfpack’s Think and Do motto. In particular, one ISE student had a trip of a lifetime traveling to Rio de Janeiro to compete in the Olympic Games and put his Wolfpack pride on display for the entire world to see.

Back in February, Ipsen held his title as ACC Champion in the 500-meter and 1650-meter freestyle swimming events. The following month he finished in the top eight of those same events at the NCAA Championships. In April, Ipsen returned to his home country of Denmark to compete in the 2016 Danish Open. There, he qualified for the Olympics in the 400-meter and 1500-meter freestyle events. His 400-meter time was the 13th best in the world. 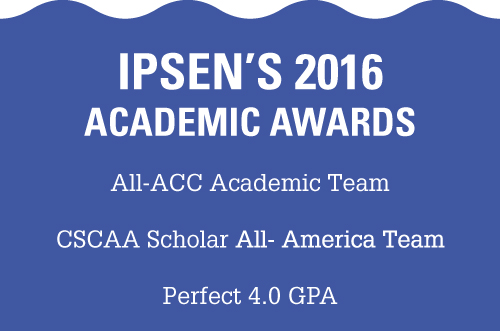 On the second day of Olympic competition, Ipsen put in an impressive performance in the 400-meter freestyle event. He managed a personal-best time of 3:48:31 which earned him a top-20 finish and the unofficial title of fastest Danish swimmer on the planet.

Ipsen arrived back at the Olympic Aquatics Stadium six days after his 400-meter event to compete in his final event, the 1500-meter freestyle. He got off to a strong start and stayed within striking distance of the leader until the half way point in the race. From there, he quickened his pace and started to close in on the lead. As he made the final turn he had not only taken the lead, but extended it out to over four seconds. “That one was 29.06!” said NBC announcer Nicole Livingstone. “So he is definitely sprinting.” As he approached the final 10 meters, NBC’s John McBeth had the call, “From Denmark, Anton Ipsen, who will win. He has a fastest time of 15:07 and he betters that by almost two seconds.”

After touching the wall, Ipsen removed his cap and turned to look at the scoreboard. Upon realizing that he had set another personal-best time, he pumped his fist and held up his best Wolf Sign to let the world know he was a proud member of Wolfpack Nation. “That’s an interesting one.” said McBeth. “With a bit of light on it against the wall there it looked like a … fox.” Well, not exactly. More like the fox’s natural predator, the wolf. Ipsen’s performance and NC State pride captured the attention not only of the commentators, but of spectators across the globe.