ISE researchers receive nearly $4.5 million worth of support to take on the challenge of creating the next generation of United States manufacturing

In June 2011, the United States President’s Council of Advisors on Science and Technology (PCAST) recommended that the federal government launch an advanced manufacturing initiative. In March 2012, President Barack Obama announced plans to revitalize the US manufacturing base with the creation of the National Network for Manufacturing Innovation (NNMI). The NNMI is a proposed network of 15 research facilities, known as Institutes for Manufacturing Innovation (IMI), in the US that will focus on developing and commercializing manufacturing technologies and is a partnership between US industry, universities and federal government agencies. An inter-agency advisory council of technical experts determined the pilot institute’s focus to be additive manufacturing. That pilot institute, the National Additive manufacturing Institute for Innovation (NAMII – now called America Makes), was established in Youngstown, Ohio, in August 2012. President Obama made reference to the institute during his 2013 State of the Union Address.

The team’s research project, entitled “Rapid Qualification Methods for Powder Bed Direct Metal AM Processes,” focuses on the predictability of a material’s properties based on its shape and method of construction. This information is critical to understand because most direct metal additive manufacturing processes are both geometry and orientation dependent, which means that the resulting material properties will vary due to the shape and how they are built.

“Since the ISE department was the first user in the world of the Electron Beam Melting (EBM) process, we will lead the academic partnership,” said ISE Professor Ola Harrysson. Carnegie Mellon, Wright State and Louisville will work on numerical simulations for additive manufacturing processes for both laser-based and electron beam-based powder bed systems. The ISE department, with the use of its new laser-based machine from EOS (Germany), is in charge of validating the models and developing new parameters for the simulation.

The simulation models will be used to predict what properties will result based on geometry and orientation. These predictions will be crucial for implementation in industries such as aerospace, automotive and medicine. Further, the simulation models can help speed up new material development for direct metal additive manufacturing processes, where the ISE team is one of the leaders. 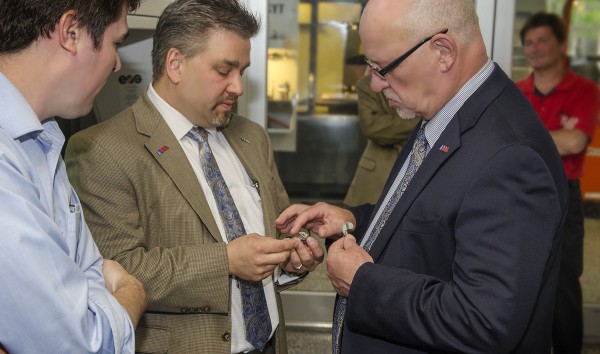 ISE researchers receive nearly $4.5 million worth of support to take on the challenge of creating the next generation of United States manufacturing.

The Rapid Qualification project was an excellent start to building a strong relationship with America Makes and associated partners, but it pales in comparison to what happened next. When President Obama arrived on campus in January 2014, everyone assumed that he was here to talk about economic development. However, his true objective was to announce that N.C. State was awarded this country’s second IMI, the Next Generation Power Electronics National Manufacturing Innovation Institute. The institute will be funded by the Department of Energy (DOE). The total funding for the Institute over the next five years is $140 million.

Dr. Harrysson was one of the principal investigators on the proposal that was submitted to the DOE which means that ISE’s Laboratory for Additive Manufacturing and Logistics will be a key contributor to the institute’s research efforts. Along with other grants that Dr. Harrysson received that same week, the lab will be part of $3.5 million in research funding over the next few years. Combined with equipment donations from last summer, the Edward P. Fitts Department of Industrial and Systems Engineering received nearly $4.5 million worth of support for additive manufacturing. This opens unbelievable opportunities for students to be part of the additive manufacturing/3D printing revolution.

The grants announced in January come in support of three different projects, each briefly described below:

Current Issue: Parts that are created using the Direct Metal Additive Manufacturing (AM) process cannot be used directly due to the lack of dimensional accuracy and surface finish. While most parts can be produced in an AM system within 24-48 hours, it usually takes 4-6 weeks to do the finishing of just one component.

Proposed Research Project: Develop a fully automatic finishing system that is highly software driven and guides the system through the process. The goal is for this hybrid system to be used to finish any part regardless of the AM process used and the CNC milling machine that is available, as long as a 4-axis configuration is present. The hybrid system will accept a design file of the desired product and the software will plan the finishing by adding machining allowance to the required surfaces, optimizing the machining approach and adding sacrificial fixtures and part supports. The output file can now be used by an AM system to fabricate the geometry.

The next step is to place the unfinished part in a four-axis CNC milling machine that is equipped with a laser scanner. The part will be scanned to capture the exact volume as well as the exact orientation. The scanned information is fed back into the software package that will automatically realign the machine axis with the part axis and automatically generate a tool path using a concept known as CNC-RP.

Current Issue: Almost any high precision shape can be fabricated using either electron beam or laser powder bed direct metal processes so long as consumers use the manufacturers’ powders. These powders are expensive and only available from a small number of suppliers. This is perhaps the most severe restriction in the supply chain for direct metal AM component fabrication.

Proposed Research Project: Create a competitive, price-driven market for AM powders by making a large variety of powder systems useable in direct metal machines. This will allow consumers to pick a powder system based on cost and required part quality, and then adjust process variables to account for powder differences.

This project will create a first of its kind database relating powder properties to process outcomes. Furthermore, for at least one powder system that is not immediately useable in a direct metal machine, the project will identify process variable changes needed to make that powder system yield outcomes comparable to standard powders. All but one of the non-powder company collaborators has, or will have at the time of this award, at least one direct metal AM machine at its location, allowing for round robin testing in a wide variety of locations and environments. The powder producer collaborators are all located in Pennsylvania, and the goal is that this project will promote a regional strength in AM powder production, catalyzed by America Makes.

Proposed Research Project: Develop a 3D printing process for fabrication of power electronic devices using a multi-material approach. Because of the fundamental one-piece flow, each piece can be customized for greater integrated functionality and can be produced in high volumes. The proposed process will utilize a number of different additive manufacturing concepts with some new and unique features.

To watch President Obama’s speech, go to: Can ISE Power the World with 3D Printing.