Many words can be used to describe the research of ISE’s ergonomics team, cutting edge, innovative, pioneering, but indie? 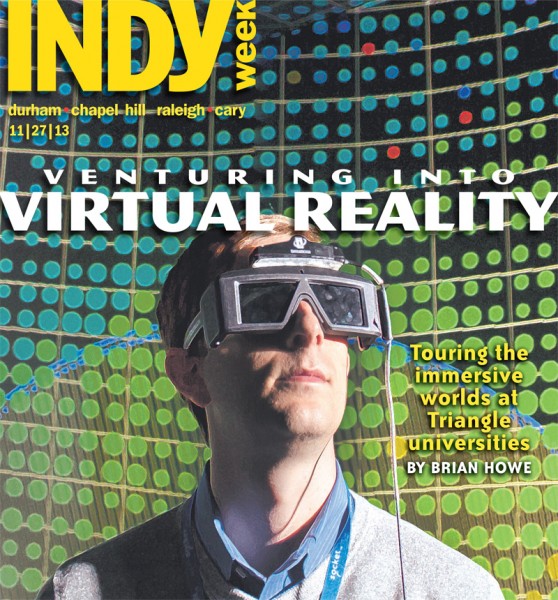 This week the team – Dr. David Kaber, Dr. Chang Nam and several graduate students – were visited by a reporter, Brian Howe, from INDY Week, a news and culture magazine in the triangle. Howe was writing a feature article for the magazine about the world of virtual reality and wanted to see what cutting edge tech was being developed at NC State, North Carolina and Duke.Howe’s started his tour of the ISE Department in the haptic device lab where he was able to test out several of the haptic controllers under the guidance of ISE graduate students. Haptic devices take advantage of the sense of touch by applying forces, vibrations or motions to the user. 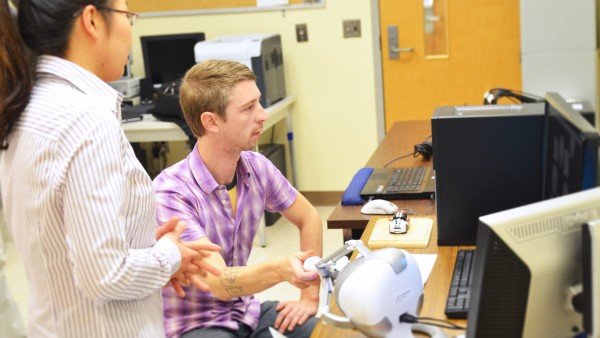 ISE ergonomics team demonstrate the driving simulator for INDY Week reporter Brian Howe. Michael Clamann, PhD candidate, instructed Howe on how to use the controller and a pair of 3D glasses to perform a block moving exercise on the computer.

“We’re reproducing occupational therapy regimens to test psychomotor skills.” Clamann told Howe. “By providing people with deficiencies with assistance in one area, you can provide more training in another.” Grad students Wooram “Linus” Jeon, JaYoung Lee and Shijing Liu also assisted Howe as he experimented with several of the other haptic controllers in the lab. JaYoung and Shijing use these devices to work with students from the Governor Morehead School for the Blind and the South Carolina School for the Deaf and the Blind. 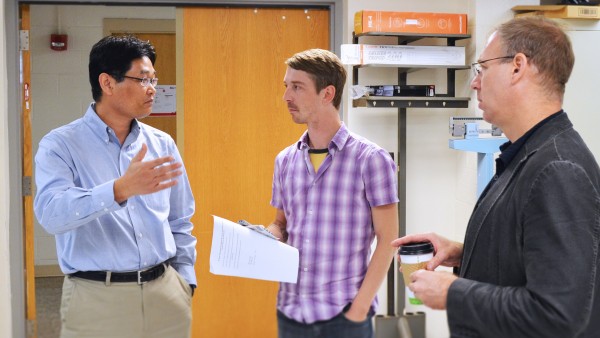 From the Haptic device lab it was on to the virtual reality lab where Howe experienced firsthand a virtual reality environment. Aboard a specially designed treadmill and again, wearing 3D glasses, Howe walked down city streets passing people going about their virtual daily lives. The simulation is designed to test situation awareness and pattern detection. Grad student, Carl Pankok, believes that this type of research will be used in the future to effectively train employees in everything from airport security to military exercises.

The final stop on the tour was the driving simulator and discussion of a research project sponsored by the Department of Transportation (DOT). Here Howe watched how the simulator monitored Carl’s eye and head movement as he drove down a virtual highway (see photo on right). The team’s research will be used by the DOT to determine the distraction level of multiple image signage on the side of the road, like restaurants, hotel and gas stations. 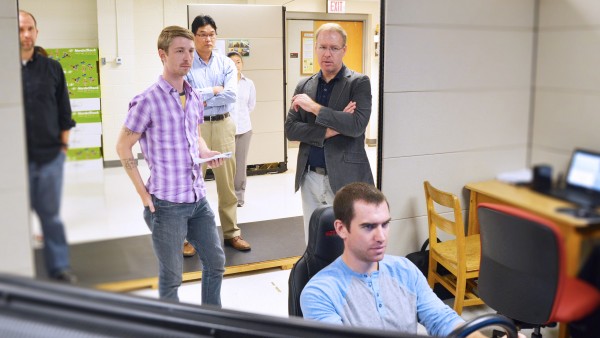 When people say the words virtual reality, it conjures up images of fictional worlds and futuristic environments. But for Brian Howe and the rest of us, it also means bold new ways of solving real world, human performance challenges today.