Each year, the twelve departments in the College of Engineering nominate one of their employees for the Awards for Excellence program. After careful consideration, the ISE Department nominated Debbie Allgood-Staton, our University Business Officer. In April, the College of Engineering selected three people from the group of twelve to represent the college on the university level. We are proud to say that Debbie was one of those three finalists. 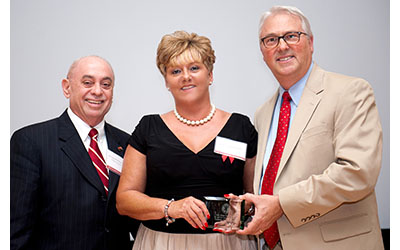 In June, Debbie received a University Award for Excellence from the Chancellor, Dr. Randy Woodson. The event was held at the new James B. Hunt Jr. Library located on Centennial Campus.