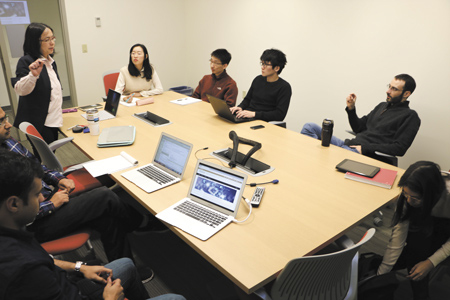 Hong Wan, left, is the director of the Purdue University Blockchain Lab, where she researches distributed-database technology. (Photo/DeEtte Starr)

Is blockchain technology the second internet — or at least its second generation? That’s what some researchers are debating. But Hong Wan, director of the Purdue Blockchain Lab and an associate professor of industrial engineering at Purdue University, isn’t sure, despite her deep interest in researching the distributed-database technology.

But Wan does have a long list of research questions for her studies about how blockchain technology might change our businesses and how our data is stored and accessed.

IBJ spoke to Wan about her work at Purdue and why blockchain technology is so compelling. Her comments have been condensed and edited.

Blockchain technology is taking off in some industries. Why?

People are attracted to blockchain for two reasons. It is very good for verification purposes. MIT is starting to give out blockchain-backed diplomas. People can fake diplomas. Now, if you have a fake one, people will realize it immediately. It gives you a kind of online certification to say whether my information is true or not. It’s called, “I have proved myself to be myself.”

Another thing blockchain technology is very good at is for, if you have a group of people working together. For example, IBM is working with 10 food companies to renovate their supply-chain system using blockchain so that people can instantly track their food: Where did it grow? How was their transportation process? Was there any contamination? You can actually see how the food is moving in the truck or on the ocean.

What is your background and how did you get interested in studying blockchain technology?

I’m in engineering and in operations research, so my focus is on computer simulations and statistical analysis. I had a student who has a very good startup involving blockchain. He introduced me to the concept.

It’s evolving so quickly and it’s a totally new area. There’s a lot of open questions here, and young people are so interested in it. I don’t know if it is the second internet or not, but I do think it will be a very important thing.

What are the goals of the Purdue Blockchain Lab? What do you hope to accomplish?

What I am interested in is to use simulation to study blockchain as a system. There’s not a lot of work on studying if you design a blockchain system, will it work better than the traditional system? This is a question about centralization and decentralization.

This is a question that’s been asked before: Should we outsource part of the production overseas? When we do that, we lose control of the quality. However, we save money. This is kind of similar.

We already have centralized systems for information. For example, in health care, there is a central computer system to store all of our records. Using blockchain, you would let the patient own their record and decide where to share it. But the question is: Is this a better option financially? Is this actually more efficient? Is this actually cheaper? When you have the patients own their health records, that means every patient has risk.

What we want to answer is, should we in the first place use a blockchain system to replace a given current centralized system? If we do that, what’s the best design? Third, how do we compare the systems to see the pros and cons of different strategies?

Also, it’s so interdisciplinary. There have been so many companies contacting me, trying to evaluate the blockchain system they are developing. I think we can have a very strong consulting team at Purdue, involving computer science, electrical engineering, statistics, Krannert. We can be the pioneers.

What are the potential downsides of expanding the use of blockchain technology?

I’m kind of concerned everyone wants to use it, without really understanding what it is. It has a cost. It’s not that energy-efficient. It’s not for everything; it’s not for every system. You need to have a reason to use blockchain. I’m worried people are using solutions looking for a problem instead of the other way around.

Why should the average non-techie or businessperson learn more about blockchain technology?

Think about supply chain, about information-sharing and about education. People in those areas should get themselves familiar with the topic. If they don’t, it’s kind of like the internet. Originally, it was only a small group of geeks. Now, any store that doesn’t have an internet website is pretty much gone.

Eventually, it is something that will allow you to totally control your own data. I think it’s very exciting technology and people should learn about it.”